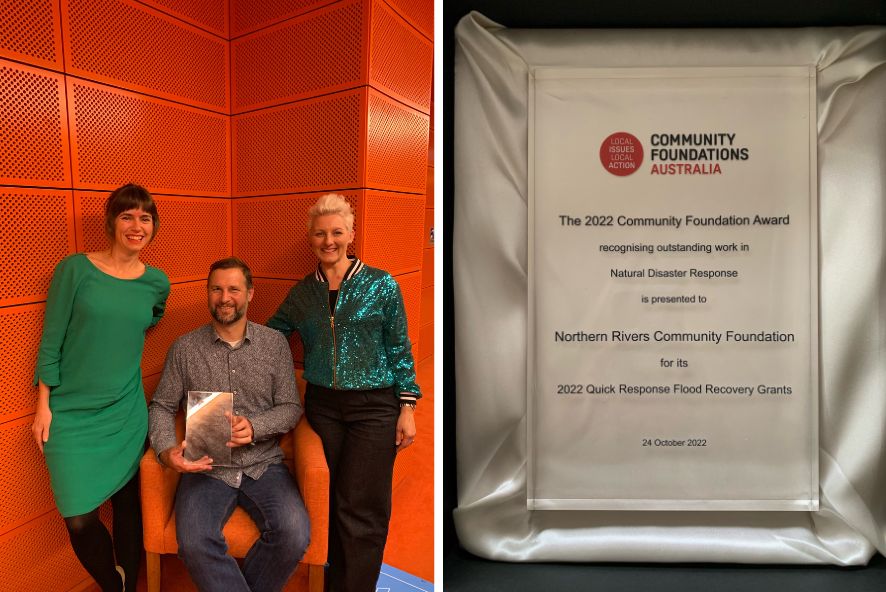 In just 8 weeks, in partnership with the Byron Community Centre who spearheaded the fundraising and awareness campaign, an incredible $1.3 million dollars was raised for this emergency response, through the Northern Rivers Flood Relief Fund.

Accepting the award at the national Community Foundations of Australia forum in Geelong, NRCF Chair Nicole Weber said the award represented the incredible strength of the Northern Rivers region and people.

“We accept this award on behalf of our community members and our community organisations – we saw something very special happen in the midst of our worst flooding event on record, and that is what this award represents,” Ms Weber said.

“We distributed an incredible 106 Quick Response Grants in the wake of the flooding events, with money reaching community organisation in just a ten day turnaround from when their application had been submitted.

“Many of the community organisations were standing in mud, speaking to our team as we helped enter their grant application. It was a time of exhaustion and trauma, yet we also witnessed an incredible community spirit and response.”

The grants distributed through the emergency response grant program covered everything from mould kits for a neighbourhood centre through to temporary office set up and housing, through to community counselling outreach.

Ms Weber said the community of the Northern Rivers was continuing to rebuild after the devastation, with a long way to go in the recovery process, however tireless community-led organisations are still working to stabilise lives and towns.

“They show the power of local solutions and responsive decision making – our community organisations know what their communities need, they are embedded and trusted, and our grants facilitate them being able to do what is needed.”