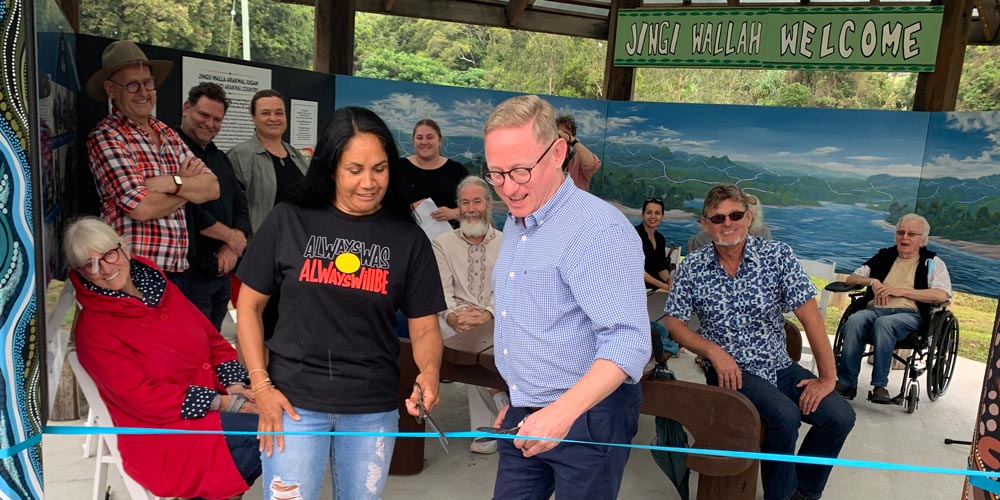 The Mullumbimby Gateway, a beautiful combination of indigenous history, cultural experience and a hub for the community, is now officially open!

After nearly 18 months in development and construction, the new gateway to Mullumbimby invites locals and visitors to stop and have a closer look at the restored totem pole and refurbished rotunda.

Project Manager Richard Mordaunt has been involved since the original Gateway community initiative in 1988. “This is a project made by many, skilled engineers, local indigenous artists and volunteers. We set out to refurbish the whole site and create a new cultural space which would celebrate the culture of our First People,” says Richard.

The restored Gateway Rotunda celebrates the culture of the Arakwal people of this region and welcomes visitors to enter with respect and care for Country. Local artists, led by Delta Kay, have created a visual history sharing cultural knowledge and a landscape panorama of the ancient pathways the Bundjalung people walked for thousands of years.

At the official inauguration on October 24, artist Nickolla Clark read out a powerful statement from Annette Kelly, Chairperson of the Arakwal Corporation.

“The opening today of the Gateway is a step in the celebration of working together, being united, caring and respecting of Jugun and looking to unifying our approach together to create a harmonious, peaceful and safe future for all our Community,” the statement read.

The NRCF are proud supporters of this project through our Community Grants program and our Deputy Chair, Lynda Dean, was honoured to speak at the opening.

Funding was also obtained through the NSW Government’s Stronger Communities Program which sponsored the restoration of the totem featured on the site. Originally carved by indigenous artist Tonu Shane and donated to the Gateway by the founders of Uplift, the totem incorporates symbols sacred to the Bundjalung of Byron Bay – Arakwal Bumberlin people, including the goanna, whale, dolphin and carpet snake (Kabul) which represents the community coming together.

After an extensive restoration by Gregg Bowering and Jason Morning, the totem pole has been colourfully painted by renowned Bundjalung artist, the late Digby Moran and his assistant, Richard Clark.

The Hon. Ben Franklin said he was thrilled the Gateway is now officially open.

“I’m delighted the Gateway once again shows the artistic skills, environmental awareness and cultural heritage of the area, and I hope everyone stops in to enjoy the refurbished space,” said Mr Franklin. “The new totem pole is an incredibly important feature to represent the indigenous heritage of the Arakwal people and share the cultural history of Mullumbimby”.

For further information about the site, visit www.mullumbimbygateway.com.