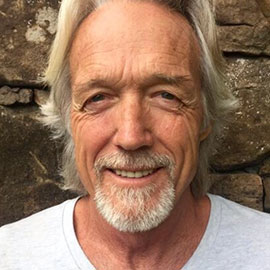 On April 29th we celebrated the extraordinary contribution of John Callanan as he moved from NRCF Chair to Patron. John has served as a passionate and dedicated member of the NRCF Board since 2004, including nearly eight years as Chair of the Foundation.

Eighteen months ago John went diving with whales in the islands of Tonga, and it was while swimming and listening to these majestic mammals that he realised it was time to step down as Chair and create a vacuum so someone else could fill it. It took another 12 months and a minor health scare to really convince both himself and the rest of the NRCF Board that he was serious about handing over the baton.

John officially stepped down as Chair at the March AGM, but not before agreeing to take on the role of Patron for NRCF. This is the first time NRCF has had a Patron and John has wasted no time in his new position, recently establishing the Patron Circle – a giving circle of donors who feel passionate about supporting the administration of the organisation.

“For many years now I have been speaking publicly about the NRCF, and I always talk about our achievements – our tremendous growth and the huge impact we have throughout the Northern Rivers, often reminding people that we started with nothing but an idea – a vision, which has been carefully nurtured by so many donors, volunteers and supporters from throughout the region, over many years.  As I look back there have been several pinnacle moments as Chair, but I usually recall handing out the annual grants to the many grant recipients. For me it becomes an emotional time, to be the focus of the recipient’s deep gratitude, and it humbles me, it rewards me, and it inspires me to keep on giving.

After an area wide search for a replacement Chair, Nicole exceeded my expectations, and so I am very confident for the future in her hands”.