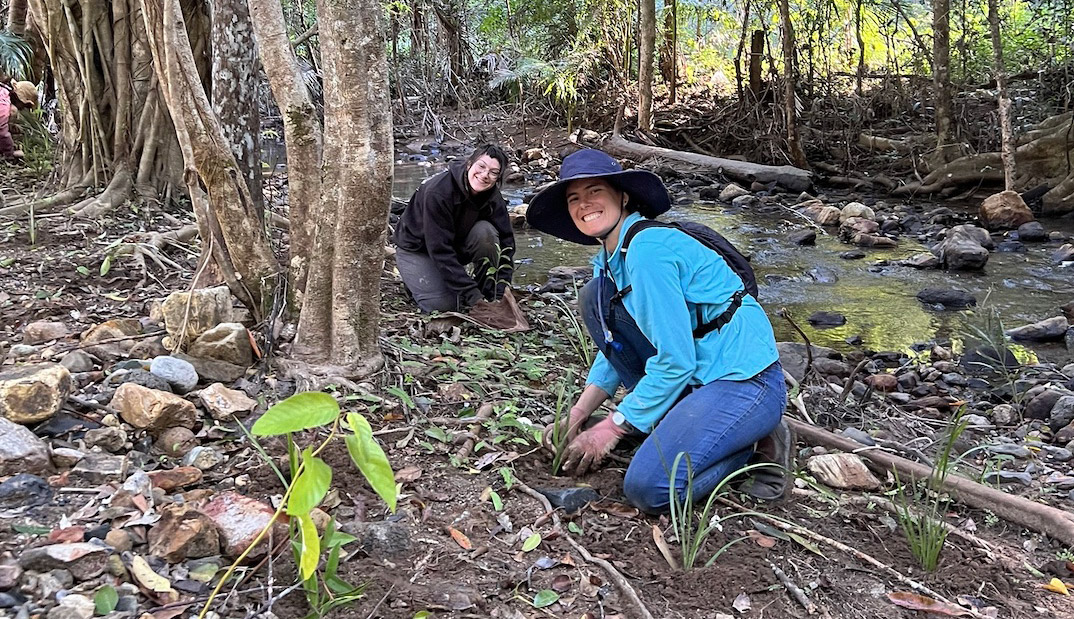 Severe flooding in the Northern Rivers in February and March of 2022 devastated communities and significantly altered the natural landscape. To the west of Mullumbimby, communities in the hinterland were hit particularly hard. Residents were cut-off and isolated with destructive landslides and raging creeks restricting access for many weeks. Their recovery is ongoing. Reforest Now used their $10,000 Emergency Response Grant (distributed through the Flood Relief Fund) to respond quickly with tree planting to remediate flood-affected land.

Lomandra spp. are native perennial herbs that look like grasses. They are extremely hardy, surviving and thriving in a range of environmental conditions. They typically form dense root systems that penetrate deep into the soil, making them ideal for erosion control, steep banks and riparian areas. When established in mass, their fibrous root systems intertwine forming ‘mat like’ structures that effectively stabilise topsoil and trap nutrients.

Sloped land quickly became unstable due to the sheer volume of rain that hit the region. Australian Defence Force personnel built walking access to Huonbrook after flooding and landslides made roads vanish in the Upper Wilsons Creek, Wanganui, and Huonbrook area. This exposed ground is prone to further erosion without efforts to revegetate.

Hours of planting was actioned quickly to prevent further degradation of the hillsides. Locals driving past expressed their support and excitement with a honk and a shaka. Residents here were cut off from the initial influx of volunteer support that reached more accessible flood affected areas. These remedial plantings were a welcome relief in the long road to recovery.

Soil quality was poor in many areas, making Lomandra a suitable option. Once these Lomandra establish, they will trap soil and allow for other species to later colonise the disturbed space. Many of the ReForest Now staff live in these communities, so with their knowledge the team was able to target land in strong need of remediation.